As diplomatic representatives of nations from which many of the members of the Legislature were born, are children of parents and grandparents born in the Caribbean.

Members of the CARICOM Consular Corps received a special invitation from member of the Assembly, Mr. N. Nick Perry, to join in the auspicious occasion of celebrating Caribbean Heritage Month, in the state of New York on June 12, 2019.  The event took place in the State Capitol, Albany, New York. 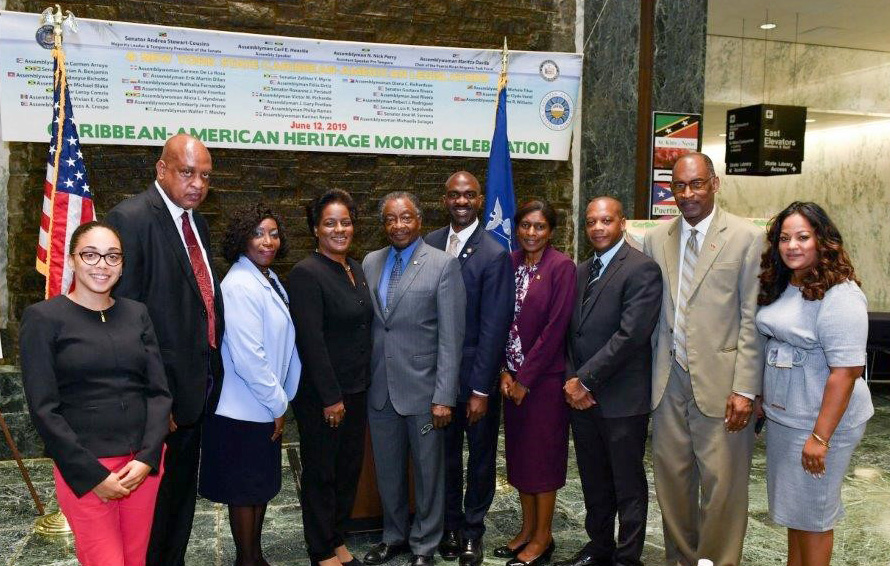 The day’s event began with a recognition and introductions in the State Assembly and Senate Chambers during Legislative Sessions.  During the session, the Senate and the Assembly adopted legislative resolutions memorializing Governor Andrew Cuomo, to proclaim June, 2019, as Caribbean American Heritage Month in the State of New York.

The Delegation representing Saint Vincent and the Grenadines, were then presented with the proclamation at a special legislative reception.

In June, 2005, the House of Representatives unanimously adopted H. Con. Res. 71, sponsored by Congresswoman Barbara Lee, recognizing Caribbean people and their descendants in the history and culture of the United States.  On February 14, 2006, the resolution similarly passed the Senate, culminating a two-year, bipartisan and bicameral effort. The Proclamation was issued by President George Bush on June 6, 2006.

Since the declaration, the White House has issued an annual proclamation recognizing June as Caribbean-American Heritage Month. This year marks the fourteenth celebration of the Month.

The campaign to designate June as National Caribbean American Heritage Month, was spearheaded by Dr. Claire Nelson, Founder and President of the Institute of Caribbean Studies.  Through the commemoration of the month of June, it is hoped that America is reminded that its greatness lies in its diversity, with Caribbean immigrants such as founding father Alexander Hamilton, who has shaped the American dream.

Saint Vincent and the Grenadines, through its Consulate in New York, serves as the current Chair and Secretariat of the CARICOM Consular Corps.  It is also the only nation in the history of the Corps to have a member serving in the capacity of Foreign Direct Investment and International Trade.

The CARICOM Consular Corps was represented by the following countries:

Consulate General of Saint Vincent and the Grenadines

Consulate General of the Republic of Trinidad and Tobago

Also, in attendance was Mr. Juan Avila, Ambassador Alternate to the Permanent Representative to the Dominican Republic to the United Nations.