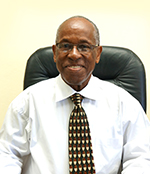 Email: This email address is being protected from spambots. You need JavaScript enabled to view it.

Hon. Louis Hilton Straker was born on February 23, 1942, in Layou, Saint Vincent and the Grenadines.

In 1962 he emigrated to the United States of America to further his education. He attended Hunter College of the City University of New York, graduating with a Bachelor of Arts Degree in Political Science in 1967.

In 1967 he began a career in banking with the Chemical Bank of New York, starting as a Management Trainee, and worked his way up to a Vice President. While working fulltime, he attended the Long Island University at night, and obtained a Master of Business Administration from the University.

He retired from Banking in 1992 and returned to Saint Vincent and the Grenadines in 1993, at the request of the people in the Central Leeward Constituency to be their Parliamentary Representative in Government. He contested the Elections of February 1994 and was elected as a Member of Parliament sitting Opposition.

On January 01, 2006, Her Majesty Queen Elizabeth II was pleased to make him a Knight Commander of St. Michael and St. George (KCMG), which in effect makes him Sir Louis Straker. He is a founding member of the governing Unity Labour Party and was elected as First Chairman of the Party. In 2000 he was elected as Deputy Political Leader of the Unity Labour Party, a position he still holds. He is a devout Seventh-day Adventist by religion and has served his church in the highest position and councils of that body.

He has been married to the former Lynda Taitt of Trinidad for the past forty-four years. She was a school teacher by profession and a gifted and talented singer. They are the proud parents of two sons and a daughter – all of whom are grown and married.